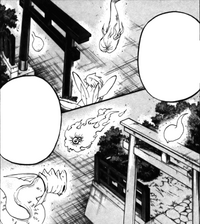 A twin set of shrine arches (Torii) , located on a pair of rooftops and virtually surrounded by taller buildings, mark the entrances to the realm of Lord Tan'yuu (淡幽の神佑地, Tan'yuu's Shinyuuchi) . Some Ayakashi constantly hover around the arches, but do not appear aggressive.[1] 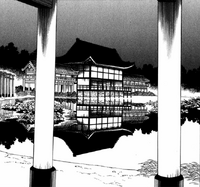 Each shrine contains a specific entrance to the spirit world: the black shrine holds a mirror[2], and the white shrine holds a pool. [3] The inside of the realm consists of forest land and a wide, open field.[4] The central feature is a large lake, with the god's mansion overlooking it nearby.[5]

Lord Tan'yuu is a moody god with little faith in himself, but highly devoted servants. He sometimes resembles a bird.

Retrieved from "https://kekkaishi.fandom.com/wiki/Unnamed_Shrines?oldid=18298"
Community content is available under CC-BY-SA unless otherwise noted.