The Kokuboro (黑芒楼, Kokubōrō, meaning Black Citadel) are an unusually organized group of Ayakashi who seek Karasumori's power in order to regenerate their ailing founder, Princess. Kokuboro is also the name of the group's castle and the alternate world where they reside.

In her attempt to save Kimiya Hachioji from Nouotoko, the parasitic Ayakashi possessing him, Tokine Yukimura agrees to accompany them to an abandoned warehouse. There, Nouotoko reveals that he is working for an Ayakashi group known as Kokuboro, who are buying and selling information about Karasumori and the Kekkaishi who guard the site. After he insults Tokine by calling her the weakest Kekkaishi, she brutally attacks Nouotoko, showing him that she is also the least merciful Kekkaishi.[1] Tokine forces him to reveal all he knows about Kokuboro: that it is based in a black castle, that they are unusually organized for any Ayakashi group, and that they seem to think as humans do in that they will do anything to reach their goals.[2] 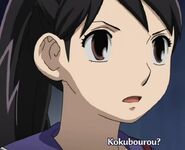 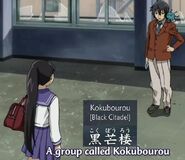 Add a photo to this gallery

According to Shigemori Sumimura, the dimension that Kokuboro inhabits was once known (and is still known to some) as Kurosusuki (黒芒). Mamezo has even come to know Princess by her nickname of "Kurosusuki's Demon Fox." However, since Kurosusuki was originally named for its terrain (kuro meaning 'black', and susuki meaning 'Japanese pampas grass'[3], which is golden in color and bears white flowers), it is most likely that Princess unconsciously changed the landscape at some point.

The dimension of Kokuboro is filled with rocky terrain, dominated by a sprawling, maze-like castle that is nearly impossible for outsiders to find their way through. Though the castle has undergone a great deal of expansion throughout its centuries of existence, it is a shadow of its former glory, and collapsing sections have become a constant problem. This is most likely because the health of Princess, Kokuboro's founder and master, is also steadily deteriorating, and the dimension's stability declines with her.

The most commonly used entrance to Kokuboro is located along a riverbank not far from Karasumori, but as the entrance is normally only used by Ayakashi, others who wish to enter uninvited must have considerable power to do so.

Retrieved from "https://kekkaishi.fandom.com/wiki/Kokuboro?oldid=20625"
Community content is available under CC-BY-SA unless otherwise noted.